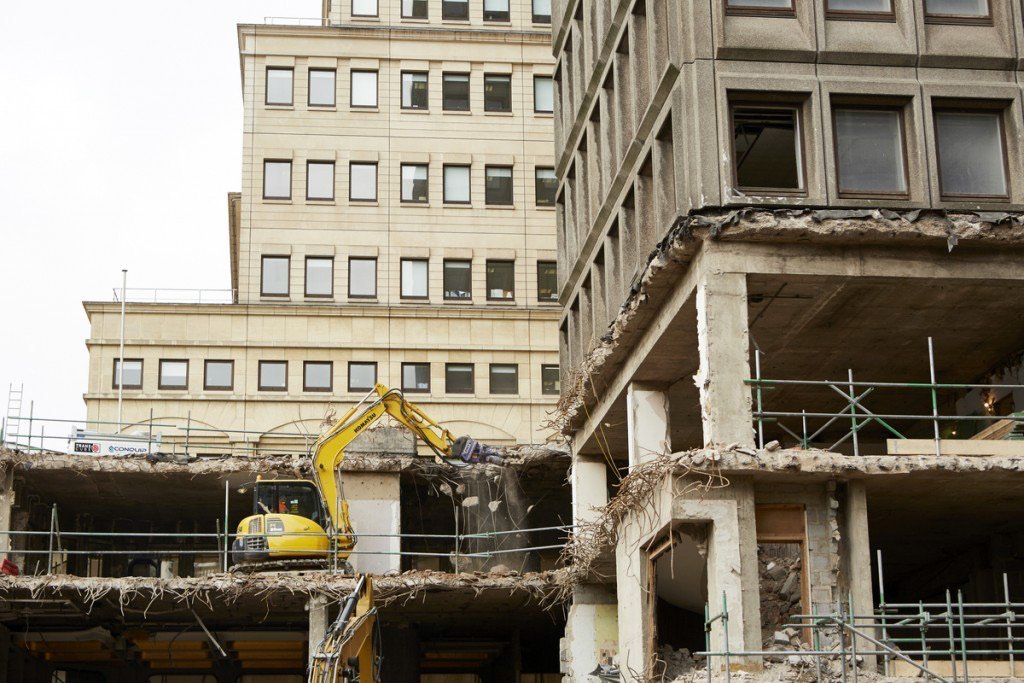 The first phase of demolition at Birmingham’s NatWest Tower is underway.

Rockspring Property Investment Managers LLP (Rockspring) and Sterling Property Ventures (Sterling) won approval to demolish the 22-storey tower in August. It will be replaced by a new 26-storey landmark building, scheduled for completion in 2019.

Demolition of the former NatWest banking hall on Colmore Row follows a four-month strip-out of the tower’s interior.

Part of the banking hall’s façade is being retained temporarily, to create a noise and dust buffer along Colmore Row; the removal of the banking hall itself will create a working zone on site for contractors to manage the demolished materials before leaving site.

More than 19 miles of scaffolding has been erected to date to facilitate the works, roughly the distance between Birmingham and Coventry.

Materials salvaged from the 1970s building, including timber, metal and concrete, will be processed and removed to a recycling plant. Around 94 per cent of the total waste will be recycled.

The ornate aluminum doors of the banking hall, commissioned from late artist and sculptor Henry Haig, have been retained for use within the new building. The bronze coloured double doors boast an abstract triangle design, based on the NatWest logo.

Peter Graham, construction director at Sterling, said: “We are working on a very constrained site in the centre of a busy business district. The removal of the four-storey podium fronting Colmore Row will create space for the contractors, without the need to impinge on public space around the site.”

Phase two of the demolition programme – dismantling the concrete tower floor by floor – will commence shortly and is anticipated to take around eleven months.

The NatWest Tower will be replaced by a £60million 26-storey landmark building, 103 Colmore Row. At 105.5m (346 ft) high and with the apex to stand 246 meters above sea level, the new tower will be the tallest office building under construction in the UK outside London. It will comprise 211,000 sq ft of Grade A office space over 19 floors, with floorplates of up to 12,000 sq ft.

At street level, plans include a winter garden and a café facing Colmore Row. At the top of the building there is provision for an 8,600 sq ft restaurant with a 3,250 sq ft ‘lantern’ space offering 360-degree views of the city.

Eric Linden, European director at Rockspring, said: “The NatWest Tower has been unoccupied since 2003 and the site has had a number of false dawns over the past decade. Having bought the building at the end of 2014, we are pleased to finally press the ‘start’ button on this project and pave the way for a new signature building for Birmingham.”