A Bob’s eye view of Birmingham 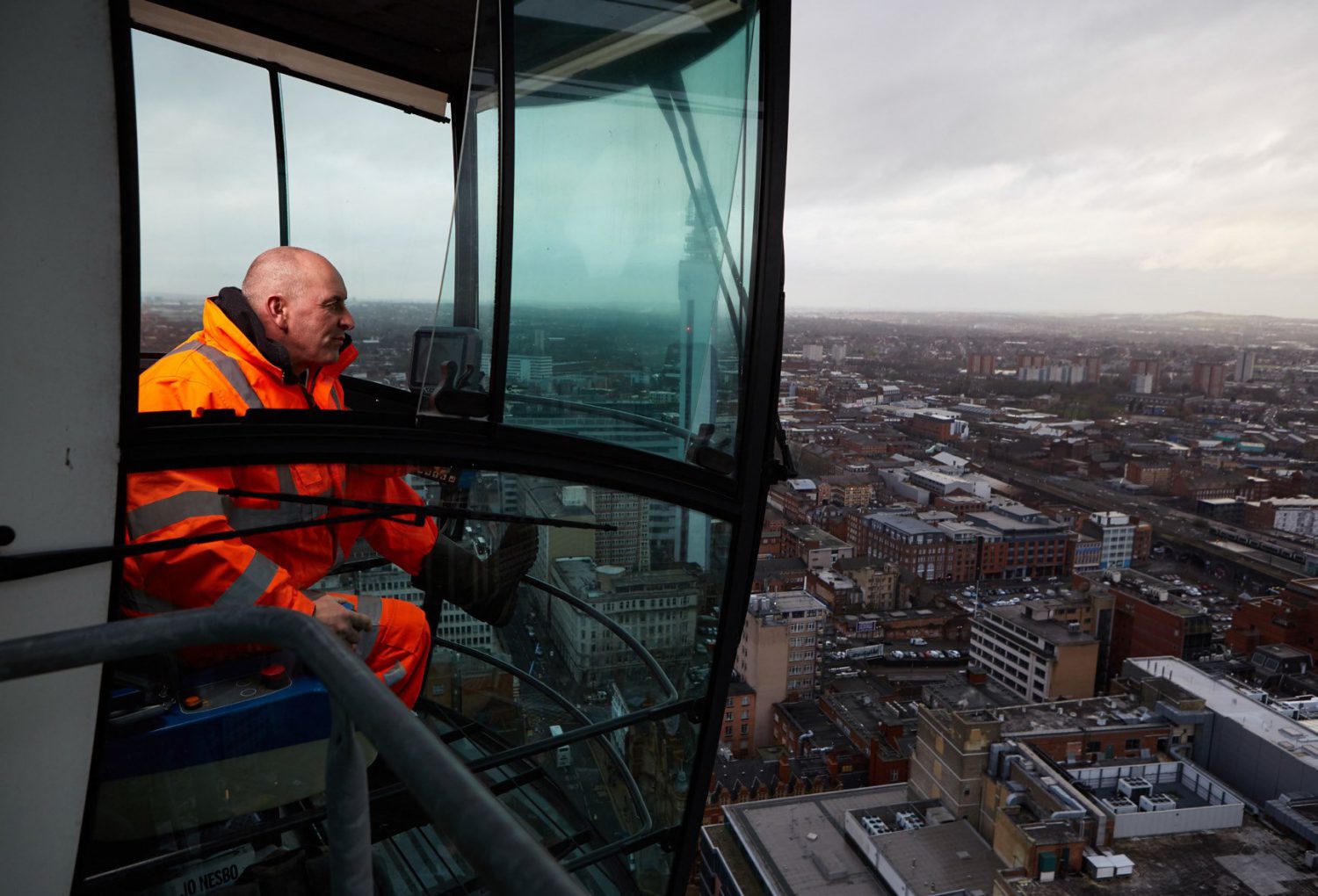 Perched high above the city, the view from Bob Brown’s ‘office’ takes some beating. Bob, the tower crane operator on the new 103 Colmore Row development in Birmingham city centre, reveals what it’s like working 350ft above the ground.

What Bob’s office lacks in size and space more than makes up for in views. From his 1.5m by 1.5m cabin, Bob gets to see a side of the city very few will ever see. The 360-degree panoramic views are just one of the perks of the job.

However, at a vertigo-inducing 350ft, being a tower crane operator isn’t for the faint hearted. A head for heights is a prerequisite; those of a nervous disposition need not apply.

A good pair of legs and a healthy set of lungs are also a must as Bob has to climb 22 ladders to get to his cab every day, which takes 15 minutes, and then climb back down again at the end of his shift. As a result, at 46 years old, Bob is in pretty good shape.

“I class it as my exercise for the day,” he said. “I’m sitting down all day so at least it keeps me fit.”

Bob has been a tower crane operator for nine years. He originally worked at Courtaulds Chemicals in Coventry for 20 years but took redundancy when the decision was made to close the Little Heath Works site.

Bob’s brother, who was a tower crane operator at the time, suggested giving it a go.

“It’s not a job I had ever thought about doing but decided to give it a shot anyway,” said Bob.

“I completed a two week training course, plus some on the job training, and that was pretty much it. Initially I worked as a banksman, who give the directions to the crane driver from the ground, before becoming a fully fledged tower crane driver myself.”

Bob has worked on buildings all over the country and is currently putting his skills to good use on the demolition of the former NatWest Tower on Colmore Row.

The building is being taken down floor-by-floor in readiness for the construction of a new £60 million 26-storey landmark office building in its place.

The new tower, 103 Colmore Row, is being developed by Rockspring and Sterling Property Ventures and when finished will stand proud above the city at 105.5m (346ft) high.

The building, which promises stunning panoramic views of Birmingham, will comprise 211,000 sq ft of Grade A office space over 19 floors, with floorplates of up to 12,000 sq ft. At the top there is provision for an 8,600 sq ft restaurant with a 3,250 sq ft ‘lantern’ space. At street level plans include a winter garden and a café facing Colmore Row.

It is scheduled for completion in 2019.

Until then, work is ongoing to dismantle the concrete tower, which is expected to take around 12 months, which means a lot more time spent high above Birmingham for Bob.

From his cab, Bob has the perfect vantage point from which to see the existing building slowly come down and eventually a new building rise up in its place.

It’s a part of the job Bob enjoys the most. “When you have worked on a project, be it on the demolition or the construction, when the building is finished you get a real sense of job satisfaction, knowing that you have played a part in something that will be there for years to come.

“I can’t say I’m a fan of Brutalist concrete buildings, so taking the Natwest Tower down is actually quite enjoyable, although I appreciate not everyone feels the same. The new 103 Colmore Row building will be a fantastic addition to the city skyline.”

Working at height does, however, have its dangers and disadvantages. For one there’s the height and the obvious safety risks that come with working at 350ft above the ground. Then there’s the weather, particularly strong winds. Anything above 38mph and the crane can’t operate as it’s too dangerous.

As a crane operator there can also be a lot of waiting around, so boredom can be a factor. Breaks are spent either listening to the radio or reading the newspaper. Popping out for a quick coffee or a nose around the shops is a bit tricky when you have to factor in a 30 minute round trip down and back up the crane.

And as far as going to the toilet is concerned? Well, we’ll leave that to your imagination.